The Terrible Teens
What every parent needs to know
by Kate Figes
Review by Jill Curtis
It is no secret that adolescence is a time of change - not only for the boy or girl who has to cope with the task of moving from dependency to independence, but also for the parents.Couples who may have been prepared for their infant to develop into a child are often caught out with the sea-change with comes with the transition from childhood to adolescence.
The more we - as parents and grandparents - can understand what adolescence is and see the pressures and difficulties which face young people today the easier it is for us to help them through these years. The author reminds us too, that âwhere adolescents seriously go off the rails, this tends to be because of problems that were present way before puberty.)
Also, where there are clashes and disagreements at home it is almost always because of misunderstandings between the generations.Figes urges parents not to stop talking to their teenagers âeven if they have stopped talking to you,â and reminds parents they have the maturity to do this! Donât blame everything on hormones either, since it is a combination of body changes and the changing mind which causes teenagers grief. Keep an eye on your adolescent, and donât dismiss problems such as depression as "just being moody".
Depression is a serious condition which can develop into a downward spiral to drugs, self-harm or even suicide. Adolescents need affirmation and to be told they are loved (just as we did when they were younger) and they need to be praised for the talents, strengths and inner qualities that are particular to them.
I don't remember being such a troubled teenager as the ones described in this book, nor do I recall my own children being especially difficult, but at the end of the day anything we can do to help our kids at this time in their lives, in this fast-changing world, has to be beneficial.I admire the way that the author is frank about her own difficult teenage years. She tells us that the divorce of her parents when she was five-years-old left its mark, and the resulting lack of self-worth affected her whole adolescence.
Parents take heart, for according to Figes eighty percent of all adolescents âride out the storm successfully and remain close and friendly throughout.â This book is a good buy for parents.
© Jill Curtis 2002
1

Back to Top
"I like to listen. I have learned a great deal from listening carefully. Most people never listen."
Ernest Hemingway
The Terrible Teens 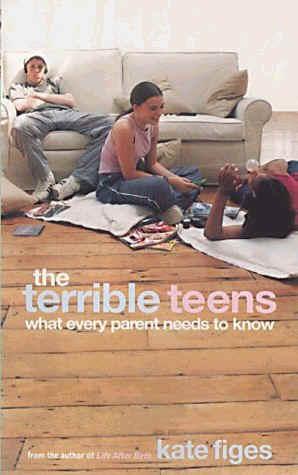