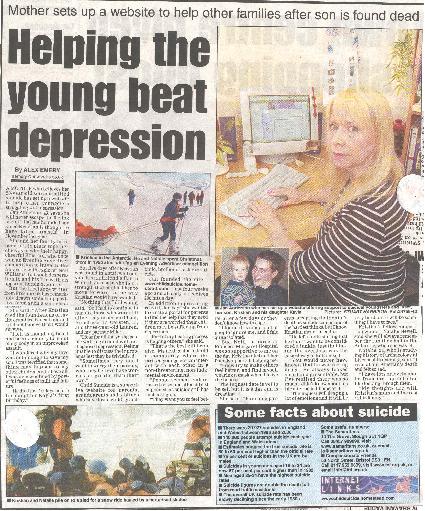 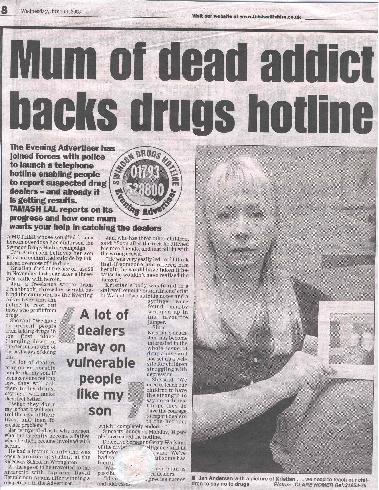 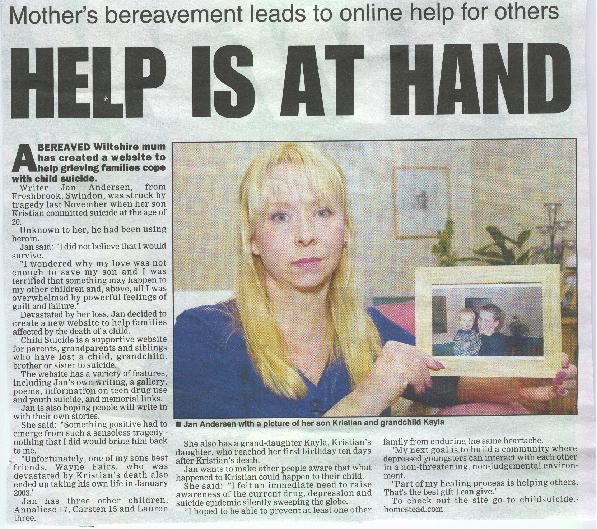 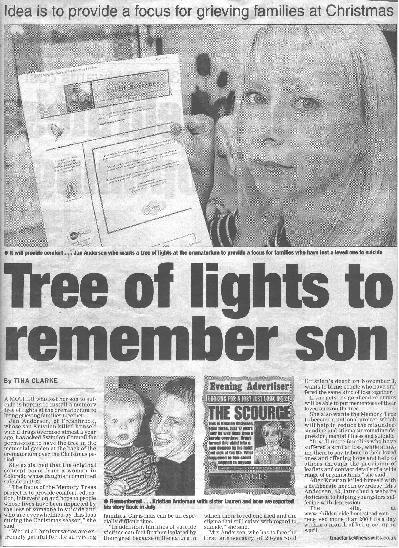 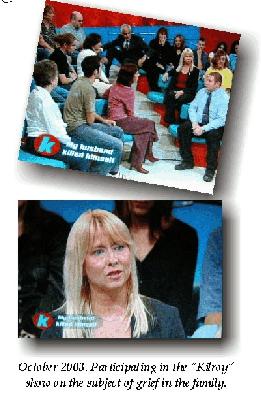 Jan participating in the Kilroy show on the topic of male suicide - 15 October 2003 (shown on 17 October)
Letter to The Evening Advertiser
First published on Monday 14 July 2003:
Parents Are The Overlooked Victims
I read with interest your story of Kristian Andersen's death in The Scourge, and wanted to commend your paper on the sensitivity you have shown to Kristian's mother, Jan Andersen.
I met Jan Andersen online before Kristian's death. Although we have never met in person, and although our surnames are the same, we are not related, except in spirit.
It is more than irony that I, as an author of a book about moving beyond bereavement, should find such a friend in Jan. God puts people in your life for a reason. I believe I know why He lead Jan to me, but even more certain why she was sent to bless my life.
I have never known, even in person, such a wonderful person, devoted parent, caring friend, and exceptional human being.
That she would use her son's tragic death to bring comfort to other parents of suicidal children only confirms my belief in her outstanding character.
I commend Jan Andersen for her strength, but especially her commitment to educating young people about heroin use, and offering comfort and support to the often overlooked and harshly judged silent victims of this epidemic ­ the parents of children who have died of a drug overdose.
To them, my deepest sympathies and my strongest recommendation to contact Jan's website for encouragement. There, you will find a friend who will, I can attest, show you the true meaning of "a friend in need".
Julie Donner Andersen
Canada
11:40am Wednesday 14th October 2009
By Sarah Hilley
A mother who lost her son to suicide has written a book to help other families whose loved ones take their own lives.
Jan Andersen’s 20-year-old son Kristian took an overdose of heroin and died on November 1, 2002.
Seven years later, her book Chasing Death is about to be published to coincide with the anniversary of Kristian’s death.
The book aims to let other mourners know their feelings are normal and they are not alone.
“I started writing the book after Kristian died,” said Jan.
“But I went for months without writing – it was so painful.
“When he died I was determined to do something for other families.
“People think after a certain amount of time you should be over it but a scent or smell can transport you back to the early days of grieving.
“You reach a level of acceptance.
“You know your child is not coming back but that doesn’t mean you are not grieving.”
The mother-of-four, from West Swindon, said she has covered topics not dealt with in most suicide survivors’ self-help books, such as handling insensitive comments and having irrational thoughts while grieving.
Jan has researched the impact of suicide on other families and includes different experiences.
She said: “The book puts into words the incommunicable pain that suicide survivors endure.
“In my frenetic search for understanding and support I had difficulty finding any resources that truly connected with my raw grief.
“Most suicide books appear to be remote and academic and focus on suicide rather than relating to the shattered world of those left behind.
“They may talk about stages of grief and recovery, but anyone who has lost a child to suicide will agree that it is a brutal ordeal from which you will never fully recover.”
Jan feels the book would also be helpful for doctors, nurses and mental health professionals.
She also said the book will provide a compelling read for anyone interested in emotional true life stories.
Jan also runs a child suicide website, which provides support for parents worldwide.
“I believe that something positive has to emerge from every tragedy,” she said.
“If the website and the book can help just one family, then it is an achievement – not mine but Kristian’s.
Jan wants to thank nurse Sue Scott who tried to save Kristian’s life and who took care of her the day he died.
Sue has contributed to chapter 19 of the book.
The book, is being published by Perfect Publishers.
For more information visit the book’s website www.chasingdeath.com.
Every book sale will see £1 donated to charity Kidscape, which provides anti-bullying advice.
Chasing Death costs £13.99 and will be available from bookshops and Amazon. 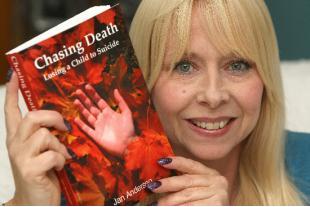 Mum hopes book will help to ease pain of suicide 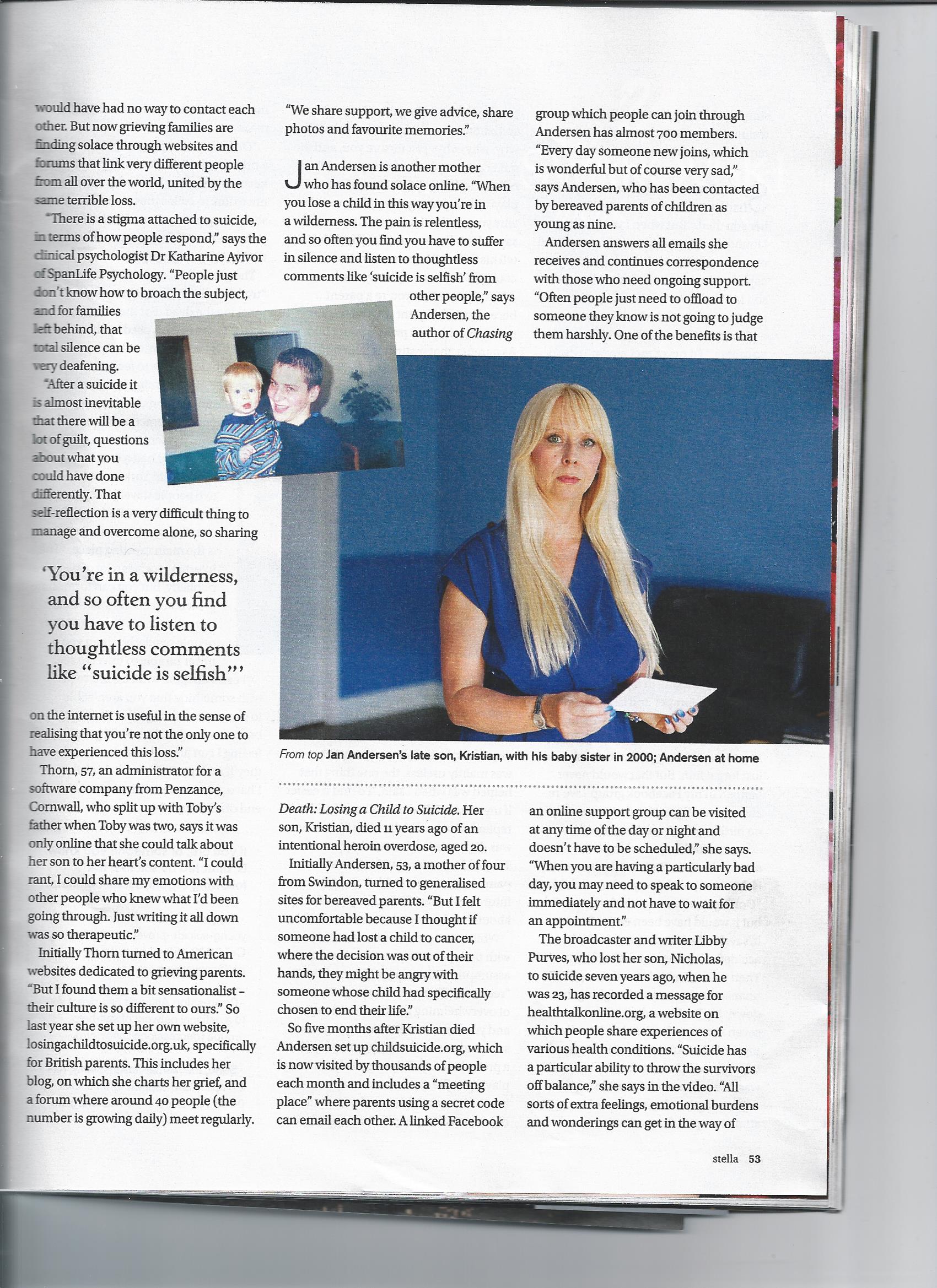