His hand was pale, with a youthful plumpness and soft, dimpled knuckles like a baby’s and yet he was 20-years-old; my “special little boy” as I had always referred to him as a toddler. As I slipped my hand into his and stroked his flawless, satiny skin, his fingers seemed to curl around mine in a reciprocal gesture of affection. I pleaded with him to open his eyes and speak to me, to tell me that it was all some sick joke, devised as a test of my love for him, but he didn’t respond.
Apart from his head and left arm, the rest of his body was covered neatly in a blue, latticed hospital blanket, identical to the one in which the midwife had swaddled him on the day he was born. This time, however, he was motionless. He was lying on his back with his eyes closed, concealing the striking emerald irises that were always emphasised by enviably long, dark lashes curling over his eyelids. His full and slightly parted lips looked as though they had been airbrushed with pale blue powder, as did his cute little ears, which still had the same characteristic kink in the top as they had when he was a tiny baby. His nail beds were also blue and his neck was flushed purple, which alarmed me, but about which I asked no questions. I presumed that this was due to cyanosis, caused by lack of oxygen in his blood. At that point, however, questions like that seemed pointless.
His short, neat hair looked as though it had recently been tinted dark red and my fingers glided through it with ease as I stroked his crown repeatedly. Why, Kristian, my darling little boy, why?
He looked more peaceful than I had ever seen him, but I desperately wanted him to wake up. I spoke to him softly through my sobs, telling him how sorry I was, how much I loved him and asking over and over again, “Why?”
I tormented myself with memories of moments when intense frustration had provoked me to shout at him and tell him that if he didn’t buck up his ideas, he would have no chance in life. How I wished I had been more tolerant. I thought about the many times when I had succumbed to his pleas against my better judgement. How I wish I’d been less lenient. How I wished I’d done so many things that I thought could wait because I had assumed there would “always be tomorrow”. However, most of what I did, I did because I loved him, not because I didn’t care. Like most parents, I wanted him to lead a good, honest life, based on moral values.
Another excerpt from Chapter One, Kristian's Story............
Kristian raced through the Kingdom of Toddlers like the Tasmanian Devil, whizzing curiously from one activity to the next, busy fingers probing curiously at everything around him, rarely sitting still, except to learn and recite, word-for-word, the pages from his favourite storybook; Goldilocks and The Three Bears.  Surpassing all other interests was his obsession with cars and the same Thomas the Tank Engine video, which had been watched so many times over that it eventually developed a pirate copy fuzziness.  His ceaseless chatter would ring in the ears of visitors long after they had departed, all marvelling at how delightful and advanced he was for his age.
He was a small boy with big dreams and his zest for life showed so much promise for the future that I never had any doubts that he would go far. However, he loved to be loved and would warm to anyone who spoke to him, even those who clearly had the potential to lead him in the wrong direction.
I feared that his good nature and desire to be accepted would allow him to be easily led when he was older, something that sadly came to pass.
One of my most vivid memories of the time that we lived with my gran, was Kristian’s attachment to a little wooden chair that had belonged to my father when he was small. My gran had kept it and it had subsequently been used by all the other little people who had passed through her house over the years. It had been painted and re-painted and received a few knocks and gouges along the way, but still it remained almost perfectly intact. When my gran died, my father took possession of it and it now stands in his dining room. The pain of looking at that empty chair that holds with it so many memories of my gran and my son is crippling, but that same chair elicits happy memories that can make me smile through my tears.
For excerpts from other chapters, please visit the Chasing Death website

Kristian's Story (Excerpt)
"He had a heart of gold"
(Taken from Chapter One of Chasing Death)
©Jan Andersen 2003
"When tears come, I breathe deeply and rest. I know I am swimming in a hallowed stream where many have gone before. I am not alone, crazy, or having a nervous breakdown . My heart is at work. My soul is awake."
Mary Margaret Funk in Thoughts Matter

Back to Top
©Designed, built and created by Jan Andersen 2003-2021
All rights reserved 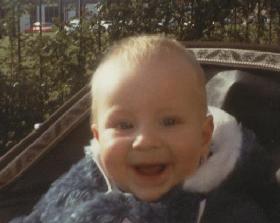